This sale is for Teen-Age Crime Wave (1955) starring Tommy Cook on DVD.

3.2
Director: Fred F. SearsWriters: Ray BuffumStars: Tommy Cook, Molly McCart, Sue EnglandSummary: A propaganda film intended to highlight the growing problem of juvenile crime. Jane Koberly, present during a robbery, is falsely convicted of being an accessory. While being taken with her companion, Terry Marsh, to an industrial school on the week of Thanksgiving, Terry's boyfriend springs them both. With the police hot on their tail, they take over a farmhouse and terrorize the family within (the Grants) while waiting for a co-conspirator to arrive with money and transport. While waiting, the boyfriend becomes more psychotic as Terry starts putting the moves on the Grants's son (to make some kind of point), and Mr. Grant takes solace from the Bible. Written by Leo L. Schwab <[email protected]>
Also known as: Teen-Age Crime Wave (on a region-free DVD). 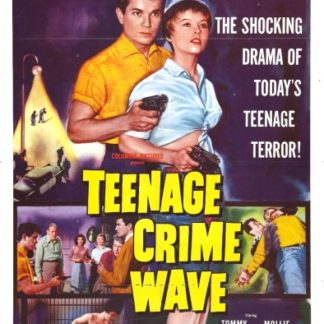