7.0
Director: Henri Safran, Ian GoddardWriters: Sonia Borg, Colin ThieleStars: Greg Rowe, Peter Cummins, David GulpililSummary: Storm Boy tells the story of a 10-year-old boy, called Mick by his father Tom, and Storm Boy by the Aboriginal loner Fingerbone he befriends. This boy is growing up in an isolated corrugated iron shed next to a wildlife sanctuary. He lives with his father, who supports them by fishing alone. He is not attending school; he is illiterate and ignorant. Mick's father resents any intrusion of their secluded life, be it a washed-up radio or a mob of idiot bird shooters who kill a number of birds before they are scared off by Fingerbone. Amongst the dead are some pelicans whose chicks are still in the nest. The boy brings them home to care for. His father isn't keen, but permits it. Three pelicans become a lot to feed when they reach maturity, so his father insists on releasing them. Two are never seen again, but one, Mr Percival, keeps coming back. Another intruder is the new primary school teacher, brought by the park ranger. She is concerned about the boy's education, and pushes hard for ... Written by Paul Gerard Kennedy
Also known as: Storm Boy (on a region-free DVD). 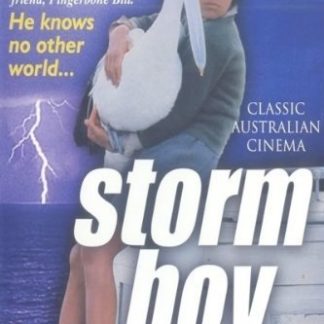