View cart “The Forbidden Dance (1990) starring Laura Harring on DVD” has been added to your cart.


This sale is for Senza vergogna (1986) with English Subtitles on DVD.

6.0
Director: Gianni SiragusaWriters: Piero Regnoli, Gianni SiragusaStars: Malisa Longo, Gabriele Tinti, Dino StranoSummary: Giorgio and his wife Alessia live in a large estate in the countryside in Viareggio. They have a dull marriage and she is unsatisfied. But he has other affairs. They often row. They have a paralyzed son Andrea, whose main purpose is amusement in spying with a telescope from a wheelchair, or even through the keyhole, the asides, which are legitimate or not, the hot mother. He, as a teenager feels the natural promptings of his age, but his efforts, rare and clumsy with peasant girls in the housing business, either by Aretha, the blonde housekeeper. Giorgio dies from a downstairs fall at home at night, the tension becomes acute. Massimo, a handsome man buys the estate and starts quickly wooing Alessia and manages to win resistance of craving widow. This aggravates and upsets the unfortunate boy and she hears his screams and leaves Massimo and runs home to the new man of the house. She will be starting a new sex life with her own son who was denied and humiliated other women.
Also known as: Senza vergogna (on a region-free DVD). 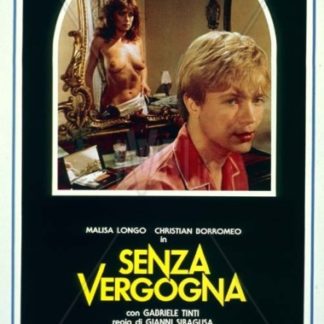