Samson vs. the Vampires (1961) with English Subtitles on DVD


This sale is for Samson vs. the Vampires (1961) with English Subtitles on DVD.

5.7
Director: Sergio Corbucci, Giacomo GentilomoWriters: Sergio Corbucci, Duccio TessariStars: Gordon Scott, Leonora Ruffo, Jacques SernasSummary: (Contains spoilers) Raiders, attacking the village of Goliath and young Ciro, transport Goliath's girlfriend, Guja, to the island of Salmanak. Goliath and Ciro follow. Salmanak, nominally ruled by a Sultan, is actually controlled by the vampire, Kobrak. Kobrak has an ally in the villainous Astra, a beautiful woman who exerts influence on the weak-willed Sultan. Meanwhile Goliath allies with Kurtik, leader of the Blue Men. The Sultan's soldiers soon capture Goliath but he escapes, after rescuing Guja, and together the two flee to a cave in the desert. There they discover the waxed bodies of Kobrak's victims and reunite with Kurtik. Kobrak arrives, puts Goliath in a pit, encloses him in a bell, and tortures him with sound waves. Goliath survives, thanks to balls of wax in his ears provided by the repentant Astra, but Kobrak succeeds in turning himself into a replica of Goliath. The "bad" Goliath and the "good" Goliath battle. Virtue triumphs, Kobrak's victims are revived, Kurtik is ... Written by dinky-4 of Minneapolis
Also known as: Samson vs. the Vampires (on a region-free DVD).

Be the first to review “Samson vs. the Vampires (1961) with English Subtitles on DVD” Cancel reply 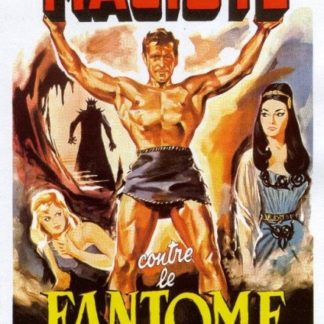