This sale is for The Castle of the Living Dead (1964) with English Subtitles on DVD.

5.7
Director: Warren Kiefer, Luciano RicciWriters: Paul Maslansky, Warren KieferStars: Christopher Lee, Gaia Germani, Philippe LeroySummary: At the beginning of the 9th century a company of wanderers specializes in a show during which a false hanging is staged. During a stop, they are invited by Count Drago to his castle. The harlequin of the company is fired by Bruno after a fight and his place is taken by Eric, a former officer. As the go to the castle they meet an old woman who foretells that when they reach their destination, some will meet death. In the forest they see a crow that looks alive, but isn't. Finally they come to the castle where, behind an open door, they find waiting for them a room full of stuffed birds, or at least they seem so.. Count Drago then makes his appearance. Written by joshu169
Also known as: The Castle of the Living Dead (on a region-free DVD). 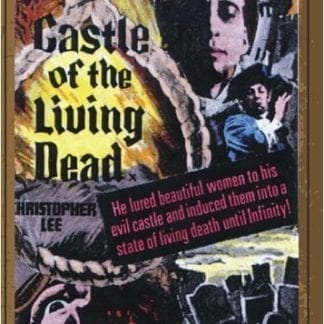