This sale is for Sacred Ground (1983) starring Tim McIntire on DVD.

6.0
Director: Charles B. PierceWriters: Charles B. PierceStars: Tim McIntire, L.Q. Jones, Jack ElamSummary: This movie tells the fact-based story of a mountain man and his Native American wife who happen upon a partially built cabin and finish it for their own home, not realizing that they occupy a sacred burial ground. A Paiute burial party clashes with the couple and in the ensuing skirmish, the wife is fatally wounded while in the middle of childbirth. Bitter over her loss and needing a wetnurse for his baby, he steals one of the Paiute women who had just lost a baby. In this modern version of Helen of Troy, the battle is on, as he takes on the whole band in a desperate attempt to survive. Written by Dale Roloff
Also known as: Sacred Ground (on a region-free DVD). 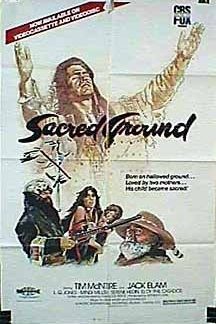