This sale is for Run Home, Slow (1965) starring Mercedes McCambridge on DVD.

6.8
Director: Ted BrennerWriters: Don CerverisStars: Mercedes McCambridge, Linda Gaye Scott, Allen RichardsSummary: Evidently an attempt by Mercedes McCambridge to appear in a dumber western than "Johnny Guitar" and she succeeds in the role of Nell Hagen who sets out to retaliate for the hanging of her father Judd, who ruled their valley with an iron hand before the natives revolted. She is accompanied by her brothers, Ritt and Kirby, a hump-backed half-wit, and their sensuous cousin Julie Ann who marries Ritt but gets nekked and seduces Kirby. The family then robs a bank and kills two tellers before dropping in on Charley Gately, leader of the group that hanged old man Hagen, and kills him and his son Gabe and daughter-in-law Ruth. And they head for the border and it gets really mean and nasty. Written by Les Adams <[email protected]>
Also known as: Run Home, Slow (on a region-free DVD). 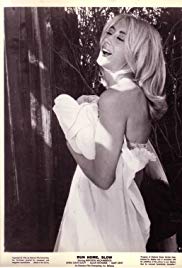