Rumble on the Docks (1956) starring James Darren on DVD


This sale is for Rumble on the Docks (1956) starring James Darren on DVD.

5.6
Director: Fred F. SearsWriters: Jack DeWitt, Lou MorheimStars: James Darren, Laurie Carroll, Michael GrangerSummary: In 1950s Brooklyn, 17-year old Jimmy Smigelski, son of hard-working, honest Polish immigrants, is at odds with his father, Pete Smigelski. His father tries to instill in Jimmy his values of hard work, respect for the law and love of family. Jimmy, however, prefers to hang around the streets with his gang, the 'Diggers', get into fights with rival gangs, such as the 'Stompers', and annoy the neighborhood cops. His father is a bitter crippled man with a beef against the dockside mobsters, led by boss Joe Brindo, who set-up the 'accident' that crippled Pete. Although the official inquiry determined that an accident had occurred, Pete is convinced that it was Brindo's mob that arranged the mishap, in order to punish Pete for trying to unionize the dock longshoremen and for speaking out against Brindo's racketeering. Unfortunately, Jimmy, doesn't share his father's feelings and, worse still, admires men like Brindo who lead a flashy lifestyle. Pete runs a small printing shop and still ... Written by nufs68
Also known as: Rumble on the Docks (on a region-free DVD). 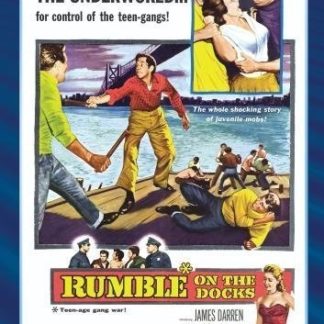