Ride Out for Revenge (1957) starring Rory Calhoun on DVD


This sale is for Ride Out for Revenge (1957) starring Rory Calhoun on DVD.

5.8
Director: Bernard GirardWriters: Norman RetchinStars: Rory Calhoun, Gloria Grahame, Lloyd BridgesSummary: In 1868, in the Dakotas, Cheyenne Chief Yellow Wolf and his son Little Wolf leave their destitute village and head toward the nearest army post in the town of Sand Creek. The two chiefs travel on foot because their tribe has very few horses. They intend to meet the local army commander to complain that, with winter approaching, their tribe needs warm clothing, horses and food. The Cheyenne have no firearms, as per treaty stipulations, and they cannot hunt for food. The local army commander is Captain George, a cowardly heavy-drinking U.S. Cavalry officer. He greets the two Cheyenne chiefs by saying that his main concern is not the Cheyenne's needs but the needs of his own people. He also insists that he was given orders to remove the Cheyenne from the Black Hills to a reservation in Oklahoma. Chief Yellow Wolf replies that the Black Hills region is their native home and refuses to accept the re-settlement to a reservation in Oklahoma. He is willing to offer Captain George a trade. The... Written by nufs68
Also known as: Ride Out for Revenge (on a region-free DVD). 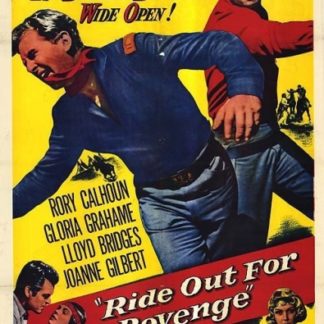