Quintet (1979) with English Subtitles on DVD


This sale is for Quintet (1979) with English Subtitles on DVD.

Director: Robert AltmanWriters: Frank Barhydt, Robert AltmanStars: Paul Newman, Vittorio Gassman, Fernando ReySummary: In the distant future the world is in the grip of another ice age. A city originally built to house five million people is now in its death throes as the relentlessly advancing glacier is slowly crushing the metropolis's steel infrastructure. The relatively few surviving fur-clad inhabitants, perhaps thousands, perhaps only hundreds, drift aimlessly in their grim, drab world, awaiting their inevitable fate as they try to survive from day to day with scavenged firewood and minimal diet. Their only solaces are booza, an alcoholic drink distilled from moss, and Quintet, a seemingly innocuous board game for six players. The only other surviving mammals are roving packs of hungry mastiffs which roam the city's corridors and quickly dispose of the remains of the dead. Newly arrived from the south is Essex with his pregnant wife Vivia, seeking shelter in the doomed city only to find it populated by people middle-aged or older. They had supported themselves by hunting seals, but now that the ... Written by [email protected]
Also known as: Quintet (on a region-free DVD).

1 review for Quintet (1979) with English Subtitles on DVD 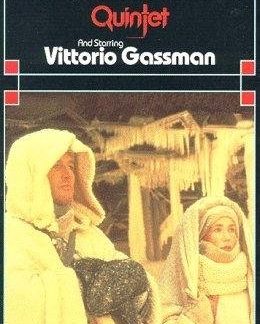