7.8
Director: Emile de AntonioStars: Roy M. Cohn, Joseph McCarthy, John L. McClellanSummary: Point of Order is compiled from TV footage of the 1954 Army-McCarthy hearings, in which the Army accused Senator McCarthy of improperly pressuring the Army for special privileges for Private David Schine, formerly of McCarthy's investigative staff. McCarthy accused the Army of holding Schine hostage to keep him from searching for Communists in the Army. These hearings resulted in McCarthy's eventual censure for conduct unbecoming a senator. Written by <[email protected]>
Also known as: Point of Order! (on a region-free DVD).

Be the first to review “Point of Order! (1964) starring Roy M. Cohn on DVD” Cancel reply 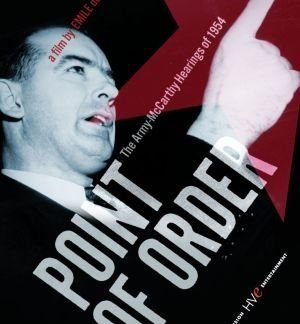