This sale is for No es bueno que el hombre esté solo (1973) with English Subtitles on DVD.

6.4
Director: Pedro OleaWriters: José Truchado, Pedro OleaStars: Carmen Sevilla, José Luis López Vázquez, Máximo ValverdeSummary: Resident in an industrial city, Martín is a lonely man who lives isolated in his villa where he has created a world of his own that he shares with Elena, a doll he treats as if she were his wife. In a neighboring apartment lives Lina, a prostitute, and her daughter Cati, an overly curious girl who discovers the truth. Little by little, Martín will be dominated by Lina, to the point that she and her daughter settle in his house. Mauro, a pimp and Lina's lover, will precipitate the tragedy with his aggressive behavior. Written by jsanchez
Also known as: No es bueno que el hombre esté solo (on a region-free DVD). 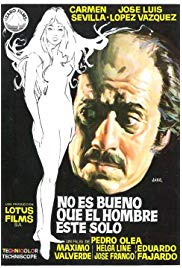