View cart “Zombies of the Stratosphere (1952) starring Judd Holdren on DVD” has been added to your cart.


This sale is for Mission Stardust (1967) with English Subtitles on DVD.

4.1
Director: Primo ZeglioWriters: Kurt Vogelmann, Sergio DonatiStars: Lang Jeffries, Essy Persson, Luis DávilaSummary: This film is based on the popular pulp novel series Perry Rhodan. The story begins with the spacecraft Stardust being launched from Earth to explore the moon in an attempt to discover new deposits of a new element, much more powerful than Uranium or any other source of energy ever discovered. The plot takes a split approach with the Stardust being taken over by a mysterious force, causing it to land on the Dark side of the Moon, and out of contact with Earth. Meanwhile on earth, an organized crime boss has planted an agent amongst the crew of the Stardust to attempt to take the energy source somehow, if it is found. Soon Perry Rhodan and his crew discover an alien starship which has had to make an emergency landing on the Moon due to technical problems. The ship is commanded by the Alien Crest and the beautiful captain Thora. They are informed that Crest, one of the last great scientists of their dying civilization is very ill.The Stardust's Doctor is asked to examine Crest and he ... Written by Rich Sensale
Also known as: Mission Stardust (on a region-free DVD). 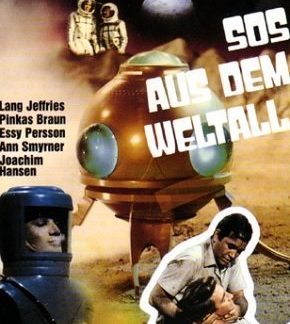