This sale is for Post Impact (2004) with English Subtitles on DVD.

3.2
Director: Christoph SchreweWriters: Torsten Dewi, Christoph SchreweStars: Dean Cain, Bettina Zimmermann, Joanna TaylorSummary: Meteor Bay-Leder 7 struck earth on October 18th, 2012. Causing earthquakes, tidal waves, and a dust cloud that soon covered most of the Northern hemisphere, it changed the face of our planet forever. Leaving Russia destroyed, and turning Europe into a snow- covered »death zone«, Bay-Leder 7 was the end of civilization as we know it. For Tom Parker, head of security at the American Embassy in Berlin, it was also the end of all he held dear - having to leave his wife and his daughter in the German capitol, he effectively sentenced them to a cold death. Three years later, most of the survivors have set up shop in the habitable territories in the equator regions. It's a harsh life, with little hope of Earth's climate ever reverting back to normal. When a military command center registers a long forgotten experimental satellite going green, an expedition is set up to find the base from where it is controlled. Halfway across the »death zone« that was once Europe, the expedition's plane is ... Written by Press department Tandem Communications
Also known as: Post Impact (on a region-free DVD). 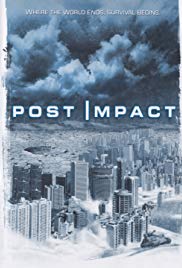