This sale is for Lucky Nick Cain (1951) starring George Raft on DVD.

5.9
Director: Joseph M. NewmanWriters: George Callahan, William RoseStars: George Raft, Coleen Gray, Enzo StaiolaSummary: American gambler Nick Cain arrives at the Mediterranean town of San Paola, and befriends an orphan Italian shoe-shine boy named Toni. He is puzzled by the reception and welcome he receives from the management of the casino until he finds he has been framed on a charge of murdering a U.S. Treasury Agent. He escapes with Kay Wonderly and they flee to a deserted village where he leaves Kay to hide out. Nick gets aid from a mysterious character named Massine, whom he suspects of trying to collect the reward offered on his capture. Nick discovers that the men responsible for the agent's death are members of an international counterfeiting ring, using the casino to pass the bogus money. Written by Les Adams <[email protected]>
Also known as: Lucky Nick Cain (on a region-free DVD). 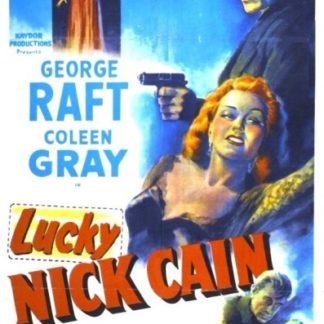