Lovers and Other Strangers (1970) starring Bea Arthur on DVD


This sale is for Lovers and Other Strangers (1970) starring Bea Arthur on DVD.

6.6
Director: Cy HowardWriters: Joseph Bologna, Renée TaylorStars: Gig Young, Bea Arthur, Bonnie BedeliaSummary: Mike Vecchio and Susan Henderson are preparing for their upcoming wedding. However, they seem to be the only two people at the wedding that are happy. Mike's brother Richie and his wife Joan are going through a divorce, which is upsetting his overly devout Catholic mother Beatrice. Also, Susan's father is carrying on an affair and her sex starved older sister Wilma is going through her troubles with her husband Johnny. All this is going on while Mike's best friend Jerry is trying to bed the maid of honor, Susan's cousin Brenda. Written by Brian Washington <[email protected]>
Also known as: Lovers and Other Strangers (on a region-free DVD). 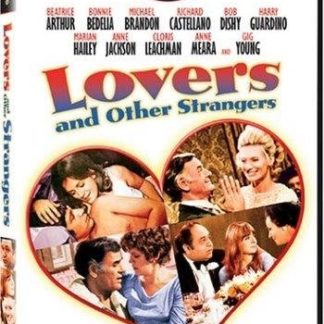