This sale is for Lost Planet Airmen (1951) starring Tristram Coffin on DVD.

5.2
Director: Fred C. BrannonWriters: Royal K. Cole, William LivelyStars: Tristram Coffin, Mae Clarke, Don HaggertySummary: This 1951 film is a feature re-issue of the 1949 12-chapter Republic serial "King of the Rocket Men" edited down to 65 minutes, which basically means that players such as Tom Steele, David Sharpe and Eddie Parker who had as many as four-to-five different roles (in addition to stunt doubling) in the 12-chapter serial only pop up here in two-three different roles but spaced closer together. Both versions find the diabolical Dr. Vulcan (I. Stanford Jolley) causing the deaths of Professors Drake (Dale Van Sickle in one of his five roles in the serial version)and Millard (James Craven, chewing less scenery than usual for him) of Science Associates, a privately-operated desert research project. The "accidents" attract the attention of Glenda Thomas (Mae Clarke), photographer for Miracle Science magazine. She visits the project and is placated by publicity director Burt Winslow (House Peters, Jr.) and project member Jeff King (Tristram Coffin.) Later, Jeff visits a cave where he has been ... Written by Les Adams <[email protected]>
Also known as: Lost Planet Airmen (on a region-free DVD). 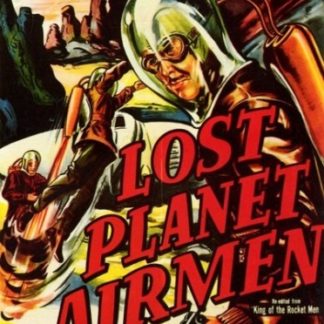