Katrina (1969) with English Subtitles on DVD


This sale is for Katrina (1969) with English Subtitles on DVD.

8.2
Director: Jans RautenbachWriters: Emil Nofal, Jans RautenbachStars: Joe Stewardson, Jill Kirkland, Cobus RossouwSummary: Katrina and her son, Paul, look and live as white people but they are coloureds (mixed race in South Africa). Paul, blonde, who has just returned from England and has been offered a job as a doctor at Groote Schuur Hospital in Cape Town, does not know that he is coloured. A new pastor Alec Trevellan, arrives and falls in love with Katrina. He also has a dark secret from the past. Katrina's brother, Adam, warns both Katrina and Alec against getting married. He invites Alec to visit the village where Katrina was born. Written by Petr Vavruch, Cape Town, South Africa
Also known as: Katrina (on a region-free DVD). 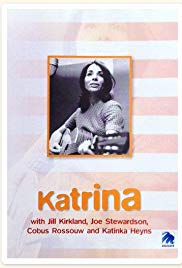