This sale is for In the Name of the Father (1971) with English Subtitles on DVD.

6.4
Director: Marco BellocchioWriters: Marco BellocchioStars: Yves Beneyton, Renato Scarpa, Piero VidaSummary: In 1958 Angelo, a rich and spoiled boy, enters a religious school, where students are tired of its vice-rector, and the strict rules and old-fashioned teaching methods of priests. Soon Angelo exerts strong leadership among his peers and incites turmoil among them, helped by intellectual Franco and shy Camma. They expel the prefect from the school, organize a Grand Guignol show, and disappear the corpse of an old professor. Encouraged by Angelo, the school servants also rebel to get better working conditions, but the strike fails when one of them commits suicide. But it will not take long before Angelo learns that the rebellion is useless. Written by Anonymous
Also known as: In the Name of the Father (on a region-free DVD). 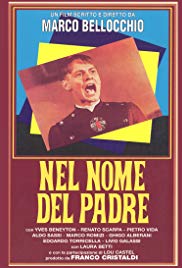