I Want to Get Even (1987) with English Subtitles on DVD


This sale is for I Want to Get Even (1987) with English Subtitles on DVD.

4.0
Director: Maman FirmansyahStars: Eva Arnaz, Clift Sangra, Nena RosierSummary: Cobra, the pornographer, abductor, drugs and weapons dealer, and his henchmen abduct and gang rape Irma, a woman who likes rough sex with her strong husband, Rudy. Irma's husband gets her free but in the escape she suffers an accident, and aborts. Irma's husband rapes Cobra's sister in revenge. The gang attacks Rudy, torture him, then drag him tied to a motorcycle until he is bleeding bad, then the Drug Lord beats him some more. Irma the mistreated housewife turns suddenly into the sexy wildcat commando, in tight shorts and boots, sleeveless low cut top, and head bandanna, who happens to have a handy bazooka to terminate the gang with great prejudice. Then she embraces Rudy, who was strong enough to survive the gang. Will he survive the Lady Exterminator? Written by Artemis-9
Also known as: I Want to Get Even (on a region-free DVD). 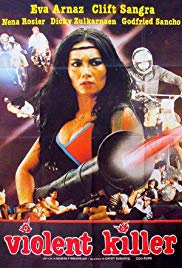