This sale is for Hotel de Love (1996) with English Subtitles on DVD.

6.1
Director: Craig RosenbergWriters: Craig RosenbergStars: Aden Young, Saffron Burrows, Simon BossellSummary: 10 years ago at a party, Steven thinks he sees the girl of his dreams, Melissa. Just as he's about to make his move, his twin brother Rick gets to her first and they fall in love. Steven watches his brother's relationship bloom, longing for Melissa all the while. Eventually, Melissa leaves to go to college and the brothers go on with their lives. Steven becomes a workaholic to block out his feelings about Melissa and Rick becomes a spineless bellboy at the Hotel de Love, after a later girl friend stood him up at the altar. Enter Steven and Rick's warring parents visiting the Hotel de Love for their anniversary. Re-enter Melissa with her current boyfriend, Norman. Suddenly Rick and Steven have a second chance at Melissa. Also there's Alison the palm reader, Susie behind the counter, the owner/piano player, and the freshly married couple. Written by Kevin Gillease <[email protected]>
Also known as: Hotel de Love (on a region-free DVD). 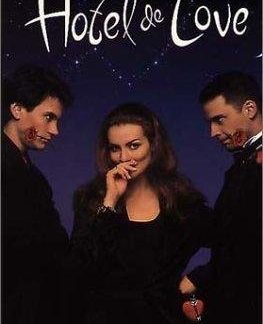