View cart “The Honey Pot (1967) starring Rex Harrison on DVD” has been added to your cart.

Hiroshima (1953) with English Subtitles on DVD


This sale is for Hiroshima (1953) with English Subtitles on DVD.

7.6
Director: Hideo SekigawaWriters: Yasutarô YagiStars: Eiji Okada, Yumeji Tsukioka, Yoshi KatôSummary: To win the war, the Americans dropped two atomic bombs on the Japanese cities of Hiroshima and Nagasaki in 1945. Hiroshima (1953) is the story of the former seen through the eyes of the targeted civilians, in general, and the children, in particular, as they live amidst the war, then as victims of the atomic bomb, and subsequently as they try to subsist in the aftermath - if they were not one of the 100,000 corpses, that is. Written by aghaemi
Also known as: Hiroshima (on a region-free DVD). 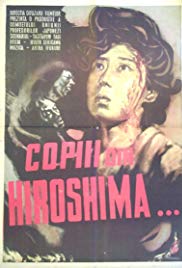