This sale is for HalloweeNight (2009) starring Brian Berry on DVD.

4.8
Director: Mark PoloniaWriters: John Polonia, Mark PoloniaStars: Brian Berry, Todd Carpenter, Bob DennisSummary: A college party is the stage for bloodshed and murder on Halloween Night, as a mistreated student exacts his revenge on those who wronged him. Using the effigy of a living scarecrow, his Frankenstein like creation carries out his heinous plans. One female student, Trix, is the only thing that stands between him and the bloodiest massacre to ever take place on the night of All Hallows' Eve. Written by Anonymous
Also known as: HalloweeNight (on a region-free DVD). 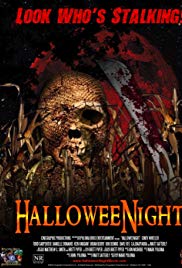