Four Nights with Anna (2008) with English Subtitles on DVD


This sale is for Four Nights with Anna (2008) with English Subtitles on DVD.

6.8
Director: Jerzy SkolimowskiWriters: Ewa Piaskowska, Jerzy SkolimowskiStars: Artur Steranko, Kinga Preis, Jerzy FedorowiczSummary: A worker, Leon, is deeply in love with Anna. (None of them are really young). During night time Leon will enter an open window and merely be sitting and looking at the sleeping Anna. He may also paint her toenails with nail polish. - Since he may also in daytime use different ways of being secretly near her, he is near in the barn, when another man binds her and rapes her. But here Leon makes a great mistake. He leaves the barn immediately after the rapist - almost as if they were together. Leon is the only one Anna could recognize. In the court he gives primitive answers. Why did he do it? "Love." He gets a 5-year prison sentence. - In a pause, maybe in an appellate court, Anna says to Leon, that she does not believe that he did it. Written by Max Scharnberg, Stockholm, Sweden 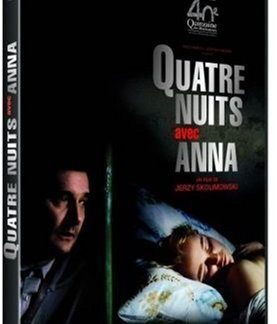