This sale is for Fast and Furious (1939) starring Franchot Tone on DVD.

6.1
Director: Busby BerkeleyWriters: Harry KurnitzStars: Franchot Tone, Ann Sothern, Ruth HusseySummary: Joel and Garda Sloan, a husband and wife detective team, who also sell rare books in New York, take a vacation to Seaside City. At Seaside, Joel's pal, Mike Stevens is managing and preparing for their beauty pageant. Joel is made one of the judges plus he has invested $5,000 in it, to Garda's dismay. Eric Bartell, promoter, arrives to dupe Stevens. When Ed Connors, New York racketeer arrives, Bartell is mysteriously murdered. Joel and Garda set out to investigate the murder. Written by Kelly
Also known as: Fast and Furious (on a region-free DVD). 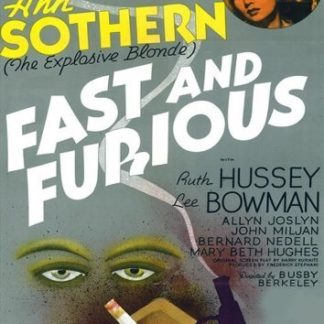