This sale is for Dollar Girl (2008) starring Regan Deal on DVD.

4.7
Director: Jack HeapeWriters: Jack HeapeStars: Regan Deal, Todd Cannon, Chris NorrisSummary: Carla Knight is a college senior, a beautiful girl from a small rural town. Her scholarship denied, Carla out of necessity becomes a nightclub stripper in order to pay her tuition. One night after leaving the club, she is raped. Carla gets her revenge on the rapist by killing him, which impresses her employer. The strip club owner tells his boss about Carla, who then approaches her about becoming a contract killer for the mob. Accepting her new vocation, Carla soon begins to use her body to seduce the targets before she kills them. Written by Jack Heape
Also known as: Dollar Girl (on a region-free DVD). 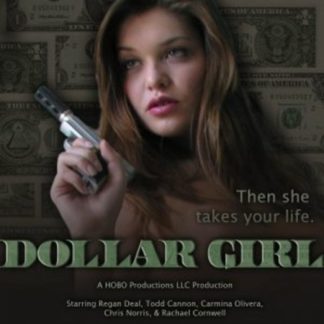