This sale is for Destination Moonbase-Alpha (1978) starring Martin Landau on DVD.

6.4
Director: Tom CleggWriters: Gerry Anderson, Sylvia AndersonStars: Martin Landau, Barbara Bain, Catherine SchellSummary: After an atomic explosion blasts the Moon out of Earth orbit, Moonbase Alpha drifts in space, with three hundred people on board. When a rescue team from Earth arrives in a faster-than-light space ship, everyone is overjoyed that they can now return to Earth. But Moonbase Commander John Koenig (Martin Landau), having undergone an experimental brain soothing process after receiving a concussion in a crash on the Lunar surface, sees not friends from Earth, but gruesome monsters which have telepathically caused all others on Alpha to see an illusion of an Earth party. The aliens are desperate for radiation and plan to manipulate the Alphans into detonating nuclear waste on the Lunar surface, reducing the Moon and everyone on it to dust. Koenig must expose this conspiracy to save his people. Written by Kevin McCorry <[email protected]>
Also known as: Destination Moonbase-Alpha (on a region-free DVD). 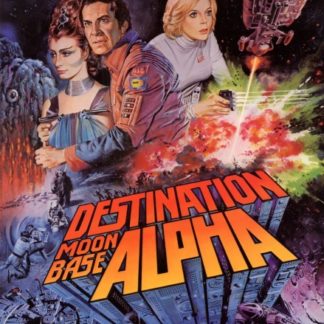