This sale is for Curtain Call at Cactus Creek (1950) starring Donald O’Connor on DVD.

6.4
Director: Charles LamontWriters: Howard DimsdaleStars: Donald O'Connor, Gale Storm, Walter BrennanSummary: An itinerant troupe of show-biz folks arrives in Cactus Creek. This band of traveling players consists of a hammy Shakespearean actor named Tracy Holland; Lily Martin,an ex-hoofer, and the young ingénue, Julie Martin. Edward Timmons is the show's combination prop man, stage manager and extra, who has aspiration of becoming an actor. While the show is going on, local badman and leader of a bank-robbing gang, "Rimrock" Thomas steals everything that isn't nailed down. This leads to several complications. Written by Les Adams <[email protected]>
Also known as: Curtain Call at Cactus Creek (on a region-free DVD). 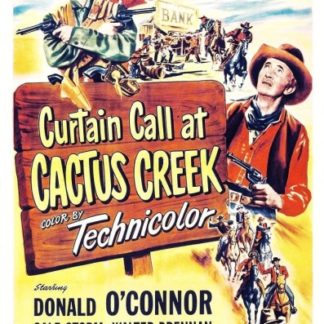