This sale is for Compromising Positions (1985) starring Susan Sarandon on DVD.

5.9
Director: Frank PerryWriters: Susan IsaacsStars: Susan Sarandon, Raul Julia, Edward HerrmannSummary: Judith Singer is a housewife, out of the journalism business for many years. When a dentist she has been seeing (who has a strong bedside manner even while female patients are still in the chair) is found murdered, she finds that a neighbor is a suspect. She begins to investigate. This places her in danger from the murderer, from the women who have had affairs with the dentist, and from the police who begin to wonder why she is always at the scenes where clues are discovered. Her husband becomes angry at what is happening, placing strains on her family as she finds herself more and more attracted to the police detective investigating the murder. Written by John Vogel <[email protected]>
Also known as: Compromising Positions (on a region-free DVD). 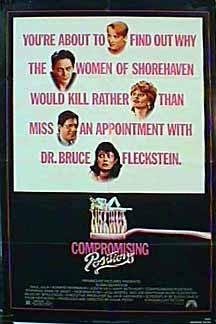