6.0
Director: Joseph LernerWriters: Berne GilerStars: Dean Jagger, John Carradine, Harry LandersSummary: When U.S. Customs Department Agent Cliff Holden's boss is murdered by jewel thieves he's assigned to the case.Holden vows to apprehend the killers and to destroy the jewel smuggling ring.For this purpose he boards a flight to Europe in order to shadow the main suspect,Matty Royal.On the return flight to America, Holden meets war-bride Kathe van Bourne who's traveling to the US to meet her American fiancé.Coincidentally,she is wearing a priceless necklace.But Miss van Bourne falls ill on the plane and she is greeted by a mysterious ambulance at the airport.The ambulance whisks her away giving Agent Cliff Holden reason to suspect that his case somehow is connected to Miss van Bourne's necklace and sudden airplane illness.Holden decides to follow this trail. Written by nufs68
Also known as: 'C'-Man (on a region-free DVD). 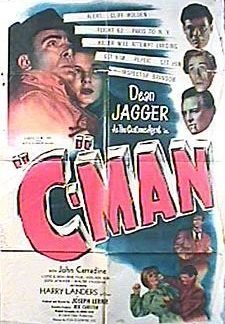