This sale is for Broadway Ballyhoo (1935) starring Owen Hunt & Parco on DVD.

5.6
Director: Roy MackStars: Owen Hunt & Parco, Herman Hyde, Sally BurrillSummary: Three barkers for a NYC sightseeing bus lament the lack of customers. They sing "What the Heck's the Matter with New York," then - using a megaphone as a viewing scope - show the gathered crowd scenes at three nightclubs. At The Casino Theatre, four couples in tuxedos dance in unison, then we watch a vaudeville routine of a young women and an old man. At the Parakeet Club, four couples dance acrobatically. At the Devil's Den, Harlem's hottest spot, Avis Andrews sings "Roll Jordan." A mildly drunk man follows a woman to Hyde and Burrill's Music Store where she sings and he comically accompanies her on several stringed instruments. Will tourists finally want the bus tour? Written by <[email protected]>
Also known as: Broadway Ballyhoo (on a region-free DVD). 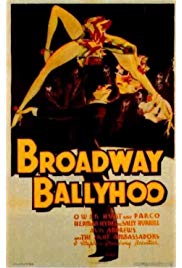