The Present with a Future (1943) starring Bette Davis on DVD


This sale is for The Present with a Future (1943) starring Bette Davis on DVD.

7.3
Director: Vincent ShermanStars: Bette Davis, Patti HaleSummary: It's Christmas morning, and pre-teens Billy and Ginny have expectations of what they will receive as gifts, Ginny a bicycle and Billy a railroad set. Instead, they receive war bonds as a gift from their mother, who explains to them that the war bonds will help what their father is fighting for, and may even pay to save his life is he were wounded. Although she could afford to give them a traditional gift plus the war bonds, she further explains that excessive consumption should not be flaunted during war time, as men and women not only fight for their country, but work in support of the war effort. Bette Davis, who portrays the mother in the just described scene, comes out of character, and as herself, implores the viewer to purchase war bonds and stamps. Written by Huggo
Also known as: The Present with a Future (on a region-free DVD). 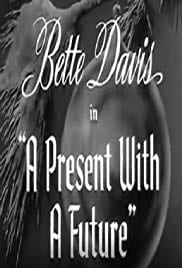