This sale is for Bad Man’s River (1971) with English Subtitles on DVD.

4.7
Director: Eugenio MartínWriters: Philip Yordan, Eugenio MartínStars: Lee Van Cleef, James Mason, Gina LollobrigidaSummary: After Roy King's gang robs a train, the men split the loot and part ways. Unfortunately for Roy, he meets and falls in-love with beautiful temptress Alicia who agrees to marry him. However, she manages to double-cross Roy and run away with his loot. Roy escapes from his predicament and re-unites with his gang. At the Mexican border, Roy catches-up with Alicia who married yet another man, river-boat casino owner Francisco Montero. Roy is hungry for Alicia, for money and for revenge. Alicia convinces Roy and Montero to join forces and follow her into Mexico where a Revolutionary leader is offering one million dollars to any mercenary who can destroy a federal Mexican Army arsenal. Of course, Roy and Montero agree with Alicia's plan. They all head to Mexico, willing to risk their lives for one million dollars. Once arrived at their destination, the unlikely partners find that the Revolutionary leader is a bit loco and the task more difficult than imagined. The million dollar reward is ... Written by nufs68
Also known as: Bad Man's River (on a region-free DVD). 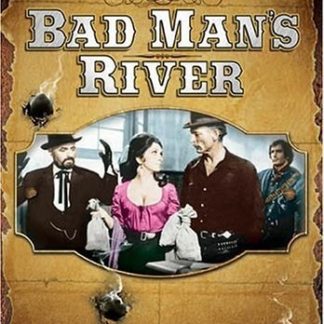