This sale is for Baby Blue Marine (1976) starring Jan-Michael Vincent on DVD.

6.1
Director: John D. HancockWriters: Stanford WhitmoreStars: Jan-Michael Vincent, Glynnis O'Connor, Katherine HelmondSummary: A young man joins the Marines during WWII but fails to meet qualifications so is washed out and sent home in a light blue uniform which apparently indicates his status. He meets a real war vet in a bar who wants to go AWOL because he is afraid to be sent back. The Vet mugs the young man in the alley and takes his clothes ,leaving him the war vet uniform to wear. The young man hitchhikes towards home but on the way he stops in a small Colorado mountain town and people think he is a war hero so he gets free food and so forth. A waitress at the cafe invites him home stay with her family an he falls in love. Curiously there is a supposed WWII American-Japanese internment camp very nearby in the woods and some scenes are included that make you think it is important to the plot. In reality there never was any such camps in the woods near a town. The only Colorado camp was near Granada in the bleak wilderness areas of the dry flats of Colorado. Later three American-Japanese teen boys escape ... Written by Ken Flood
Also known as: Baby Blue Marine (on a region-free DVD). 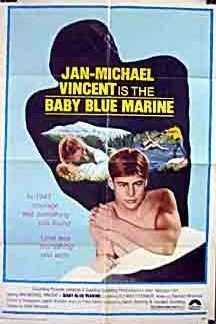