View cart “Among the Living (1941) starring Albert Dekker on DVD” has been added to your cart.

Among the Living (1941) starring Albert Dekker on DVD


This sale is for Among the Living (1941) starring Albert Dekker on DVD.

6.3
Director: Stuart HeislerWriters: Lester Cole, Garrett FortStars: Albert Dekker, Susan Hayward, Frances FarmerSummary: Paul Raden (Albert Dekker), hopelessly insane son of Maxim Raden, hated owner of the Radentown mills, is in a strait jacket in a secret room in the family mansion, while the body of his father is lowered into a grave. Twenty-five years earlier, the brutal father had hurled Paul against a wall when the young boy had tried to defend his mother and, with his brain injured forever, Paul's last memory, before descending into the shadows on insanity, was his mother's agonized scream. At the graveside are Dr. Ben Saunders (Harry Carey), Paul's twin brother John (Albert Dekker) and John's wife Elaine (Frances Farmer). Pompey (Ernest Whitman'), the family servant who has cared for and guarded Paul and kept the family secret for a quarter of a century,watches from afar. That night Dr. Saunders tells John that his twin, who he thought dead, is alive as the father, refusing to commit him to an institution, had bribed the doctor to sign a false death certificate and then bury another child's body ... Written by Les Adams <[email protected]>
Also known as: Among the Living (on a region-free DVD). 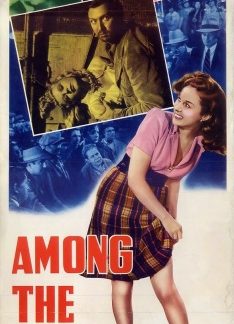