This sale is for The Frightened City (1961) starring Herbert Lom on DVD.

6.2
Director: John LemontWriters: Leigh Vance, John LemontStars: Herbert Lom, Sean Connery, John GregsonSummary: In London's West End, crooked mob accountant Waldo Zhernikov meets with gangster and nightclub owner Harry Foulcher to create a new crime syndicate. Waldo suggests that Harry recruit the five most prolific mobsters from the West End and create a syndicate with Harry as a boss. Every member of the syndicate would still control his usual territory and they would all evenly divide the profits, after paying Waldo his customary 20 per cent fee. During a meeting, they all agree to the plan. Their racket is the protection business. They force many small merchants and business owners to pay a monthly protection fee. Most victims comply out of fear. Those who refuse, are intimidated, beaten or have their businesses vandalized by hired thugs. The police does what it can to stop these acts but the resources and manpower are stretched to the limit. Detective Inspector Sayers is in charge of the West End rackets investigation. But witnesses are afraid to talk to the police. The crime syndicate had... Written by nufs68
Also known as: The Frightened City (on a region-free DVD). 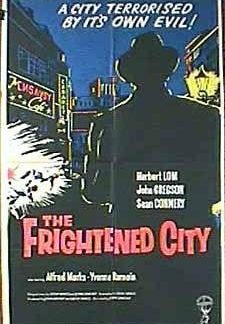