Director: William WitneyWriters: Willard W. Willingham, Mary WillinghamStars: Audie Murphy, Michael Burns, Kenneth TobeySummary: In 1868 Arizona the Apaches led by Cochise are on a warpath and U.S. Army Captain Bruce Coburn is tasked with protecting settlers on their way to Apache Wells. A group of undisciplined soldiers, led by corporal Bodine, make Coburn's task more difficult. When they're sent after a shipment of repeating rifles Bodine and four others steal the weapons and desert. Captain Coburn manages to return to Apache Wells where he vows to capture Bodine and his fellow deserters. Meanwhile, Bodine mets Cochise to negotiate the sale of the stolen repeating rifles without knowing that Captain Coburn has recovered the stolen weapons and has killed the other deserters. Cochise and Bodine chase after Captain Coburn in an attempt to recuperate the rifles which both the Apaches and the settlers need in order to prevail. A race against time ensues. Written by nufs68
Also known as: 40 Guns to Apache Pass (on a region-free DVD). 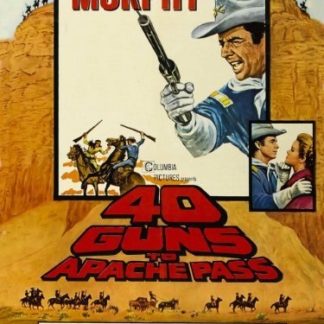