6.6
Director: Ilya KhrzhanovskiyWriters: Vladimir SorokinStars: Yuriy Laguta, Marina Vovchenko, Sergey ShnurovSummary: Meat merchant Oleg, prostitute Marina, and piano tuner "simply Volodya" drop into an all-night bar in Moscow, where they are served by a narcoleptic bartender (three plus one is four) while each regales the others with made-up biographies. Oleg claims to work in President Putin's administration, supplying him with bottled water and his wife with liquor; Marina passes herself off as a marketing executive; and Volodya, the infamous lead singer of the rock group Leningrad, as a geneticist who clones twins (two times two makes four, again) in a laboratory that has been engaged in these experiments since the days of Stalin. After they separate, these fantasy realities, especially Volodya's, begin to dominate their everyday lives.
Also known as: 4 (on a region-free DVD). 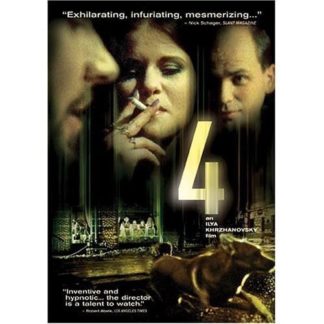