6.7
Director: Jack WebbWriters: William BowersStars: Jack Webb, William Conrad, David NelsonSummary: Managing Editor Sam Gatlin arrives in the afternoon and departs early the next morning, having assembled a morning newspaper for Los Angeles. During this implausibly active day in the life of a metropolitan newspaper, Sam and his wife Peggy argue about adopting a child. The reporter's grandson pilots a military plane from Honolulu to New York. A child is lost in the LA sewers (Gatlin composes a warning headline with picture: "Children Stay Out of These"). And copy boy Earl Collins considers quitting after failing to properly deliver a bet by city editor Jim Bathgate on the sex of children being born to a famous actress. Written by Paul Schindler <[email protected]>
Also known as: -30- (on a region-free DVD). 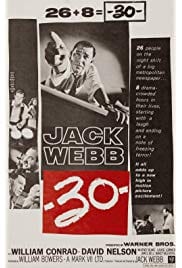