5.8
Director: Wolfgang LiebeneinerWriters: Rudolf Brunngraber, Ernst MarboeStars: Hilde Krahl, Josef Meinrad, Waltraut HaasSummary: It is the year 2000 and the World Global Union is in charge, although other countries are allowed to elect their own government leaders, as long as they support the Union. When Austria's newly-elected president, makes his inauguration speech, he declares Austrian independence and issues an edict ending Austria's financial support for the Global Union. The Global Union President arrives in a flying-saucer with her retinue of world-soldiers, equipped with death-ray guns, to put an end to the rebellion. The president and the country are put on trial. The Austrian president recounts the country's' long battle for peace, and shows how Austria stopped the invasion of the Turks, and gave the world the operetta and the waltz. He organizes a mass parade with flora floats and a brass band playing the Austrian Freedom Song in order to appeal to the court's impartiality. A 1943 document signed by Roosevelt, Churchill and Stalin and assuring Austria of independence is presented. Written by Les Adams <[email protected]>
Also known as: 1. April 2000 (on a region-free DVD). 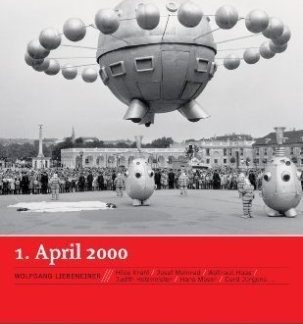