Zorro the Rebel (1966) with English Subtitles on DVD


This sale is for Zorro the Rebel (1966) with English Subtitles on DVD.

5.2
Director: Piero PierottiWriters: Gianfranco Clerici, Piero PierottiStars: Howard Ross, Dina De Santis, Charles BorromelSummary: California, a province of the Spanish colony Mexico. Don Ramiro, the secretary of the tyrannical governor, is charged with assuring his son, don Luis, the chief of the military police, can marry Isaballe, the daughter of don Miguel, who plans to divide his land among his tenants, a recipe for revolt. Secretly don Ramoro is Zorro, the masked leader of the popular rebels. Both parties resort to desperate means, while don Carmello, the forcefully persuasive mission priest, guards morality. Written by KGF Vissers
Also known as: Zorro the Rebel (on a region-free DVD). 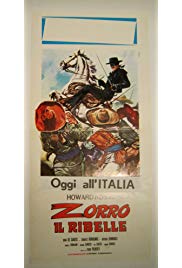