This sale is for Zatoichi’s Revenge (1965) with English Subtitles on DVD.

7.4
Director: Akira InoueWriters: Minoru Inuzuka, Kan ShimozawaStars: Shintarô Katsu, Norihei Miki, Mikiko TsubouchiSummary: Itinerant masseur and master swordsman, the blind Zatoichi, is near the village of his teacher, Hikonoichi, so he decides to visit. He learns of Hikonoichi's recent robbery and murder and the imprisonment of his virginal daughter, Osayo, in a brothel. Through friendship with Denroku, a local dice thrower and devoted father, Ichi uncovers an unholy alliance between the governor and the area strongman: among their scams is falsifying tax records to put farmers in debt, then forcing their daughters into prostitution at the boss's brothel. With help from Denroku's daughter, Otsuru, Ichi comforts Osayo until he can provoke showdowns with the villains and their henchmen. Written by <[email protected]>
Also known as: Zatoichi's Revenge (on a region-free DVD). 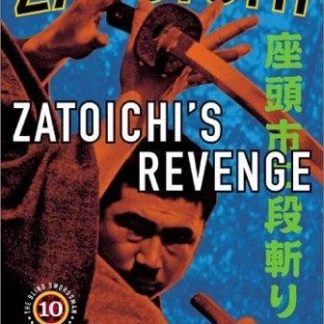