Year of the Carnivore (2009) with English Subtitles on DVD


This sale is for Year of the Carnivore (2009) with English Subtitles on DVD.

Director: Sook-Yin LeeWriters: Ken Chubb, Sook-Yin LeeStars: Cristin Milioti, Mark Rendall, Ali LiebertSummary: Twenty-one year old Sammy Smalls has self-esteem issues. She hides behind her frumpy clothes and the slight limp she sustained from a childhood illness. She works in a dead end job as an undercover shoplifter detector at a Big Apple Food Town, her boss Dirk who has his own brand of vigilante justice for the shoplifters. And she considers her parents, although loving in their own unique way, not good role models for her. She doesn't like people touching her in an emotional manner, the ticklish feeling she gets from such being yet another thing behind which she hides. As a result, she is sexually inexperienced. However, she does have a crush on Eugene Zaslavsky, a busker musician who performs outside her supermarket. Each considers the other a friend, but their attempt to take the friendship into a sexual realm results in utter disaster. Although they vow to remain friends, Eugene won't sleep with her again due to her sexual inexperience. So Sammy goes on an expedition for advice and ... Written by Huggo
Also known as: Year of the Carnivore (on a region-free DVD). 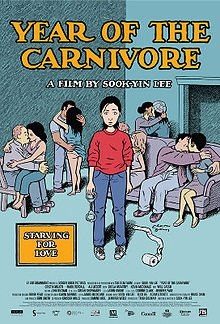