4.2
Director: Sam Shu-Pui HoWriters: Sai KongStars: Grace Wai Wong, Ruby Jo Yi Wong, Man Gui HohSummary: A ambitious young man sets off to make his first million in a gigolo club. Wing is a hairdresser whose boss is gay, but he certainly isn't. When a cute young babe gives him a full-on view of her knickers, Wing fantasies about her, causing to get so hard that he pounds the head of the woman whose hair he is shampooing. This woman runs a gigolo club, and invites him to join. Wing is helped (sort of) by the other guys, led by muscleman Wai Man. We also meet two of the club's regular clients. One is a busty young woman (comparable size to Amy Yip) whose private parts reek. The other is a fishmonger, who uses for unusual purposes before selling them. Wing is favored by the lusty mistresses of old Mister Lo. This lady convinces Wing to seduce Lo's daughter Millie, in a scheme to gain Lo's money. But they fall in love.
Also known as: Gigolo Club (on a region-free DVD). 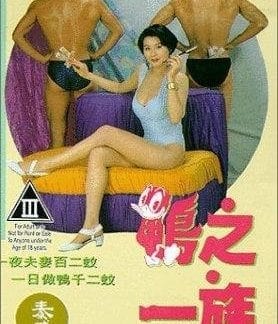