Women in Cell Block 7 (1973) with English Subtitles on DVD


This sale is for Women in Cell Block 7 (1973) with English Subtitles on DVD.

4.7
Director: Rino Di SilvestroWriters: Rino Di Silvestro, Jack LyonsStars: Anita Strindberg, Eva Czemerys, Jenny TamburiSummary: To save her father, Carmelo Musumeci, accused by a gang of drug traffickers of making twenty kilos of heroin "disappear", young Lilly is incarcerated - insulting two traffic police officers - in order to get in touch with a girl, Daniela Vinci, who knows how things really went. Ignoring that the parent, in an attempt to escape the gang, died falling from a ruined house, Lilly manages to wrest the young woman of the disappeared heroine - after some futile attempts, and while mysterious recluses searched with the complicity of a supervisor, to terrorize Daniela to prevent her from speaking. Knowing the truth, however, will be of no use because, warned by the director of the prison, a faithful servant of the drug traffickers will - after his release - kill both her and the police commissioner to whom he had entrusted the information obtained by Daniela. Written by Ulf Kjell Gür
Also known as: Women in Cell Block 7 (on a region-free DVD). 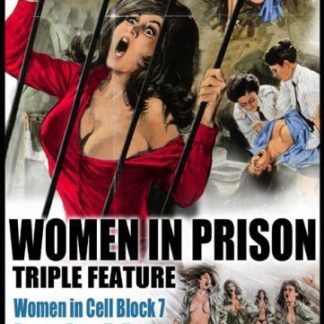