Wild Jokes in the Classroom (1983) with English Subtitles on DVD


This sale is for Wild Jokes in the Classroom (1983) with English Subtitles on DVD.

3.2
Director: Ilias MylonakosWriters: Lefteris KaponisStars: Nikos Rizos, Giannis Vogiatzis, Makis DemirisSummary: A group of students, with a "female tough guy" named Karcharias (Shark) as its leader, has fun every day playing tricks and going about putting on shows of affection. All these pranks, of course, make even more difficult the job of the principal and the teachers: of Chemistry (Mr. Charamadas), of Theology (Mr. Varelas), of Maths (Mr. Delimanis) as well as of the gym teacher (Ms. Sexomanaki) who try, in vain, to control them. The gym teacher, however, Ms. Sexomanaki (as her name implies) manages to seduce the theologian Mr. Varelas, provoking the jealously of all her loveless colleagues. They, in turn, recruit the new philologist, Ms. Glyka, who uses her good looks to put the boys on their best behavior and devote themselves to studying. The girls, however, don't fall for it. Using the same weapons, and with similar success, they provoke the interest of their male classmates. Written by Greek Film Archive
Also known as: Wild Jokes in the Classroom (on a region-free DVD). 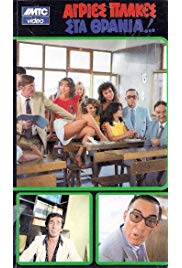