This sale is for Whoops Apocalypse (1986) starring Stuart Saunders on DVD.

6.1
Director: Tom BussmannWriters: Andrew Marshall, David RenwickStars: Stuart Saunders, Graeme Garden, Marc SmithSummary: A small British colony is invaded by its Communist neighbour. Newly elected female President of the United States, Barbara Adams, tried to sort out the mess but the British under the leader of PM Sir Mortimer Chris sends in a task force to seize the islands back. For revenge, General Mosquera, leader of the Communist country, hires the best terrorist in the world, Lacrobat, to kidnap the British princess Wendy to hold her to ransom to get the British out. So now Barbara has not only got to deal with Mosquera and Lacrobat, she has also to deal with Sir Mortimer, who totally goes mad and thinks up really stupid ideas (such as pushing the unemployed over a cliff and that the entire employment problem is caused by evil pixies.) but also with the fact that Russia is looking to aid the Communist country and this could start World War III... Written by Lee Horton <[email protected]>
Also known as: Whoops Apocalypse (on a region-free DVD). 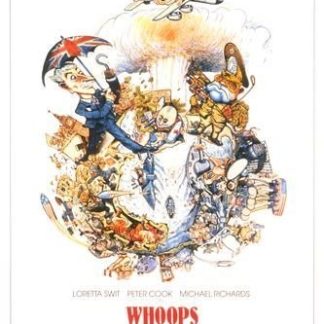