This sale is for Wedding in White (1972) starring Donald Pleasence on DVD.

6.6
Director: William FruetWriters: William FruetStars: Donald Pleasence, Carol Kane, Doris PetrieSummary: It's the early 1940s in small town Ontario. Sixteen year old Jeannie Dougall is slightly dim, naive and lacks any self-confidence, immersing herself in the romantic lives of characters she sees on the movie screen as witnessed by the pictures she has plastered on her bedroom wall. Anything that Jeannie tries that is new or different is usually a result of being egged on by her more experienced best friend, Dolly, who flaunts her burgeoning sexuality. Jeannie lives with her working class parents, Jim and Mary Dougall, Scottish immigrants who live by their conservative and religious beliefs. Jim is a member of the Honor Guard, and has a view that anyone who wears a uniform in service to the country, such as his and Mary's son Jimmie Dougall, is to be admired regardless. Jimmie's non-battle service in Canada is in munitions requisitions. One day, Jeannie announces to her mother that she believes she's pregnant from what was her only sexual encounter to date: being raped by Jimmie's ... Written by Huggo
Also known as: Wedding in White (on a region-free DVD). 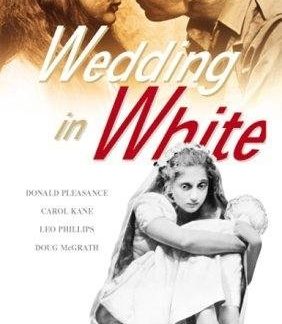