This sale is for Walking Shadow (2001) starring Joe Mantegna on DVD.

5.5
Director: Po-Chih LeongWriters: Robert B. ParkerStars: Joe Mantegna, Ernie Hudson, Marcia Gay HardenSummary: As a favor to his longtime lover Dr. Susan Silverman, Spenser agrees to investigate the stalking of a theater company director, pro bono. But before he can get started, an actor is killed by an arrow in the middle of a play. Now that there's a real-life murder to investigate, Spenser and Hawk, get to do what they do best--even if it means death threats from the Chinese underworld, being ordered out of town by the tough local police chief, and dodging bullets and crossbows at every turn. By the time they leave the quaint ocean front community, the population has decreased by three, and live theater will never be the same. Written by A&E
Also known as: Walking Shadow (on a region-free DVD). 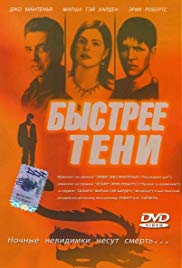