This sale is for Victim (1961) starring Dirk Bogarde on DVD.

7.7
Director: Basil DeardenWriters: Janet Green, John McCormickStars: Dirk Bogarde, Sylvia Syms, Dennis PriceSummary: A plea for reform of England's anti-sodomy statutes, Melville Farr (Sir Dirk Bogarde), a married lawyer, tries to locate a blackmailer who has photos of Farr and a crying young gay man (who is being blackmailed and later commits suicide) in Farr's car. After the suicide, Farr tracks down other gay men being extorted for money by the same blackmail scheme. Worldly Police Detective Inspector Harris (John Barrie) considers the anti-sodomy law nothing more than a license to blackmailers, and eventually is contacted by Farr to capture the malicious blackmailer. The movie, far ahead of its time, ends with Farr and his loving wife coming to terms with his homosexual tendencies in advance of the public exposure he will face in the team of blackmailers' trial. Written by Mike Mills <[email protected]>
Also known as: Victim (on a region-free DVD). 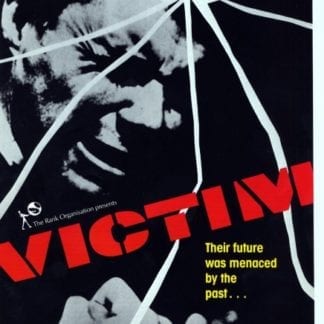